After the first videos from Valorant testing appeared a lot of comparisons of the new game Riot with the already existing CS:GO game. And this is not surprising, because the games are really very similar to each other. Shooting mechanics are almost identical, there is almost no difference in movement too, and even the task of the players in the match is the same – to install or neutralize Spike (analog of a bomb). Of course, there were comparisons with other games such as Overwatch, but the greatest number of similarities are between Valorant and the latest installment of the Counter-Strike series.

An integral part of both CS:GO and Valorant is the ranking mode. With it, players can not just play dozens of games, but also compete with each other, getting different ranks, roughly reflecting the level of skill. And, since the games themselves are often compared, it is possible to compare their ranks as well. Reddit user dragonitor has already done this for us by compiling all the ranks and the percentage of players who got one or the other rank CS:GO or Valorant or lower. 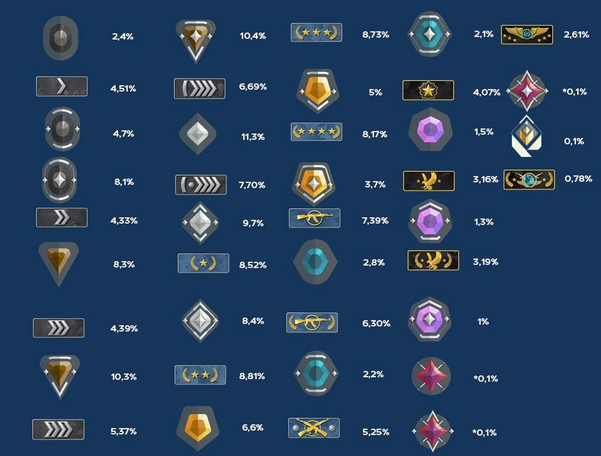 This comparison is probably the only option because the number of ranks in the compared games is different. In CS:GO there are 18, and in Valorant as many as 22 – 7 groups of 3 ranks and one top rank “Radiant”. The table shows that only 0.11% of Valorant players were able to get such a high rank, and the top rank of CS:GO – Global Elite – was able to get only 0.02% of players. It is hard to answer whether it is good or not, because ranks are given for a reason, and for success in the game, so it is quite fair that only a small group of players were able to get to the highest rank in the list. Also for both games, you can find boosting services to help you reach even the highest ranks, for CSGO they are called “CSGO rank boosting” and “Valorant rank boost” for Valorant games. But you can be glad that only 2.8% of Valorant players have the lowest rank, from which it is possible to move up in the future.

However, there is a “but” in the distribution of ranks of Valorant players – since the developers of Valorant did not give official tools to track player statistics, the data is taken from the unofficial site Blitz.gg, and reflects the ranks of its users, not all players. This may have affected the stats, so it can be assumed that the ranks of the site’s users are slightly higher than the ranks of all players.